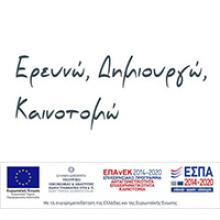 DOTSOFT S.A. participates at the implementation of the project “MuseionTopos” – Project code: Τ1ΕΔΚ-01571 under the framework “RESEARCH – CREATE – INNOVATE” of the Operational Programme “Competitiveness Entrepreneurship Innovation” (EPAnEK 2014-2020), Partnership Agreement 2014-2020.
The project is co-financed by the European Union and the European Regional Development Fund.

Given the huge cultural reserve of Greece, potential applications of interactive systems in heritage are inexhaustible. The proposed project ‘Mouseion Topos’ pursues a particular contribution to settlements and museums of the Aegean, which are characterized by exceptional architectural heritage, industrial tradition, artisanship and craftsmanship. The particular settlements (and islands) of the Aegean have a low number of visitors and tourists for a long period of time within a year; they recently have absorbed great pressure from the refugee (Lesvos & Chios) and economic crisis (Tinos); while their museums are not always in vivid interaction with them. The constant connection of these peripheral museums to the settlements and the islands creates significant benefits for the local communities, tourism, education and learning. The proposed project aims to connect the PIOP museums to the settlements through interactive gamified systems that will exploit mobile and kinesthetic technologies that will emphasize to the promotion of architectural heritage and the intangible tradition of craftsmanship. The main objectives of ‘Mouseion Topos’ are: (a) Digitization and documentation of the architectural heritage of settlements (according to the HERMES methodology and system) and of selected museum exhibits (emphasis on 3D artifacts), (b) Connection of the museums to the settlements through guided gamified tours to visitors, (c) Elevation of the intangible tradition of craftsmanship through kinesthetic simulation games of digital (re)constructions, (d) Assurance of sustainability of project results through various elements like: human-centered approach (co)design thinking and practice, content sharing with Europeana, creation of MOOCs (Massively Open Online Courses), scientific publications, sustainability plan. After the end of this project, each museum will be an innovation cell fully integrated to the settlement. Voth the PIOP foundation and the HERMES system have been awarded with the Europa Nostra award for their contribution to cultural heritage. The proposal has the support of the municipalities of Chios, Lesvos and Tinos (letters of support).